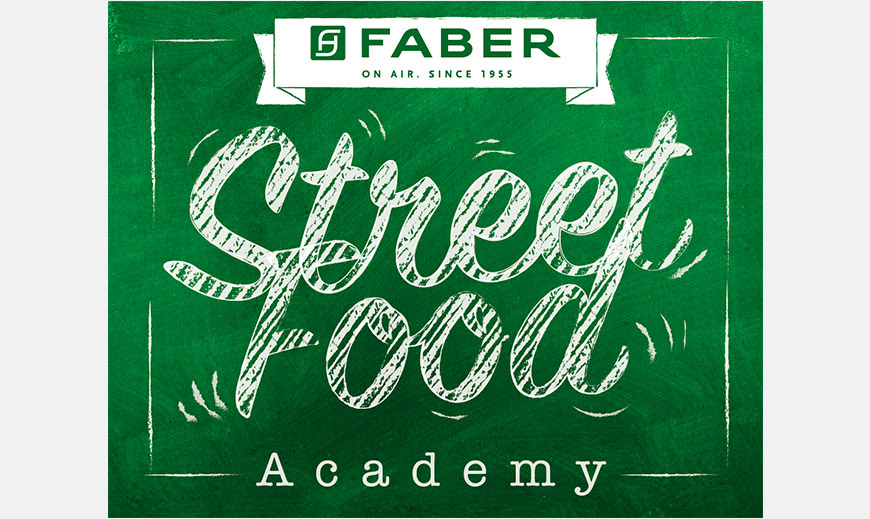 Lovers of street food, the Faber Street Food Academy is on the way

A special journey around the world in 10 lessons to learn about the flavours, secrets and techniques to become expert street food makers. We begin from southern Italy with arancine [fried stuffed rice balls] and panelle [chickpea croquettes] from Palermo. We then fly 8,000 km east, to Japan (to be precise), to learn how to make true home-made okonomiyaki. Mexican specialities made with tacos, guacamole and burrito are the topic of July’s last lesson. After the summer pause the journey continues to India, South America, Asia and Europe.

The latest trend in culinary art is called Street Food, with its apparently simple and popular dishes that are gathering more and more fans. Cooking lovers are growing increasingly interested in them because they are a challenge – recreating the atmosphere of a town or country by working with the typical ingredients of its culinary tradition. Faber knows this well. This is why it is creating a school in which to learn everything there is to know about some of the most famous and appreciated street foods in the world. Simply stated, you will be able prepare at home the things you eat among the pavilions of Expo 2015 – possibly offering it to the more curious of your friends as well. The Faber Street Food Academy is a real journey around the world in 10 single-subject lessons starting on 8 July, exploring the flavours and fragrances of southern Italy. The first lesson is on panelle and arancine from Palermo. These fried foods come together in the second lesson dedicated to Neapolitan street food and specifically to the ‘cuoppo’, a mixture of fried foods wrapped in paper cones. The venue is the Cucinoteca in Milan, in via Ludovico Muratori. Here real street food makers who work in the field will reveal tricks, recipes and secrets to prepare the most famous street foods at home, with the necessary arrangements in terms of raw materials, preparation techniques and keeping the rooms and the air clean. The next destination is Japan and the city of Osaka, with okonomiyaki, a traditional dish made with wheat flour and cabbage leaves and that has nothing to do with sushi, sashimi and wakame sea weed. This dish is as popular as the more famous tortillas and burritos, the stars of the fourth lesson (29 July) dedicated to Mexico. After the summer pause it is the turn of other less famous street delicacies, such as made-in-Bangkok Pad Thai and Lahamacun, the so-called Turkish pizza. India is a must to learn how to prepare many versions of samosa, i.e. Indian wraps. In October the Faber Street Food Academy will take participants to South America and Africa, then return to Europe and France, with its hundreds of ways of preparing crepes. Why have you not registered yet?

Don’t forget to look at the photo gallery of our lessons on
www.facebook.com/FaberCappe